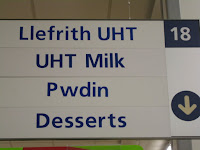 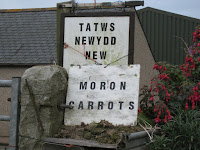 If you have opened your 2011 Census, the chances are that you will notice that question 17 is blank. It literally says "This question is intentionally left blank." Conspiracy theories abound online (of course) but the reason for it is rather interesting. There is a question 17 but only in Wales where it asks if you can understand spoken Welsh, speak Welsh, read Welsh, write Welsh or none of the above. I love Wales and am continually fascinated by the language - in what other country could a Tesco store serve "pwdin" (read the "w" as a "u")? The fun I genuinely had with the following conversation...
Me: What's the Welsh for carrots?
Unsuspecting Welsh person: Moron.
Me: Calm down, I only asked a question!

But since I am not Welsh and neither do I live in Wales, I am faced with a blank space. What to do?

The sensible thing to do would be to just pass over it. But searching online reveals a wide range of other possibilities of things people are doing from the childish (drawing a giant phallus) to the impressive (writing the answer to the absent Welsh question in Welsh) to the creative (placing a sticky note over the blank space and writing on it "Do not remove this sticky note"). Suddenly, question 17 asks more of us than any other question. It provides us with a blank space but specifically invites us to move on by adding "Go to 18." Indeed, the instructions at the beginning specifically ask us to leave the space blank.

But wouldn't it have made for an interesting census if question 17 had asked, "How would you like to fill the following space?" How would you have answered it? I have a feeling I would have quoted Shimon ben Gamaliel (Pirke Avot 1:17) - "I have found nothing better for anyone than silence."
Posted by Rabbi Neil Amswych at 17:39