It's the Shoes, Stupid!

I haven't cycled properly now for two weeks. There was the quick 2 mile ride to Temple a week ago, which was met with a rather nice round of applause, but that's not really the kind of ride I should be doing right now - the minimum distance should be 15 miles. Unfortunately, I haven't been able to because of the serious knee pain that I've been suffering. During my last 30-mile ride, at about 15 miles I was struck by a serious pain in both knees, but my left knee in particular. I decided to ride through it and within a couple of miles it was gone. I finished the thirty miles well. A day later, though, I was in pain and it just remained. I posted on Facebook and there were lots of suggestions, particularly including ice. After a week of suffering I decided to follow people's advice and go and talk to the people at REI. 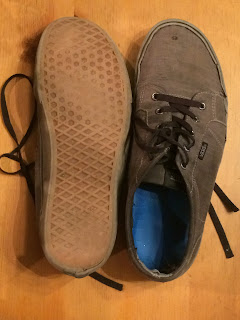 Here was the challenge. I've done a bike ride before - not 100 miles but still sizeable - and I never had knee pain then. So what was causing it this time? The first suggestion was predictable - the seat position must have been wrong. But even with a Transatlantic move, the seat hasn't shifted at all, so that can't be it.
"What shoes are you wearing?" asks the nice man at REI.
"These," I say, looking down.
"Are you serious?" he says
"Yes."
"Well, that's the source of your pain. Are you getting pain on the very ball of your feet as well?"
"Actually, yes I am!" I say surprised, as though I didn't think this guy would know exactly what he was talking about. So he shows me shoes and I'm rather surprised to be looking at $100 for a pair of shoes plus another $70 for pedals plus another $30 or so for cleats. There are three parts to cycling shoes - pedals, shoes and the cleats which connect the two. I tell him I'm going to have to go and think about this. He suggests that until I buy shoes that I go to Wallgreens and buy their clay cooling and heating pad, because it's the best one there is. I try to see whether icing the knee will just solve this problem. 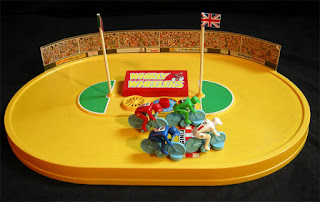 Of course, even if the ice fixes it, there's still the issue of what shoes to use the next time I ride. I'm quite afraid of clipping in to a bicycle because I can only imagine that I'll not be able to put my foot down and will topple over. But a number of people have been talking about clipping in because it makes you go so much faster and because effort is expended pulling up as well as pushing down. Still, the comedy possibilities of falling over because I'm attached to my bike are low and the wounding possibilities high, and I could really do without any more injury. Around this time, I remember the game Whirly Wheelers, which we used to play every time we went to my Grandma's house. The best thing about that game was watching their little legs go, because they were pulling up as well as pushing down. Was I going to become a Whirly Wheeler?

In a couple of days, someone from Temple Beth Shalom explains that there's a road bike at their house that gets used by a family member for the Santa Fe Century. It's road-ready and already has clips. I pick the bike up and it's perfect, complete with pedals, thereby saving me $70 or so. This is happening. 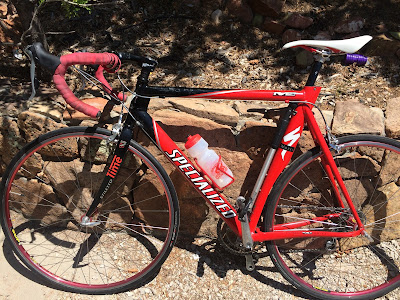 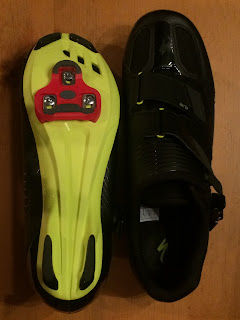 When I return to the cycle section at REI, there's a different guy serving and I explain to him about the knee pain and my shoes. "You're wearing THOSE?!?" he asks incredulously, looking at my feet. I'm rather embarrassed by now. He shows me through the choices of shoes - there are 3 to choose from - and then very honestly tells me that their selection of shoes isn't very good and that I should look elsewhere in Santa Fe. I'm very impressed with his honesty, so I take a look at their gloves to see if at least their prices there are competitive. The gloves are on sale so that's promising. I go to Bike and Sport right next to Trader Joes, which is a really excellent shop. I tally up the cost of what's to come and I hesitate. Again, with remarkable honesty, the man there tells me that he's there to sell me things. If I want, I could go elsewhere and buy a nice pair of trainers/sneakers that would be fine to use for the century and then at all other times. However, if I want to go quickly, and if I'm thinking of cycling long-distances again, then I should consider clips. After a while, I make an important life choice and buy shoes and cleats. 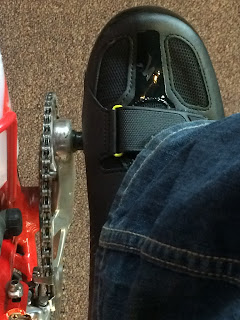 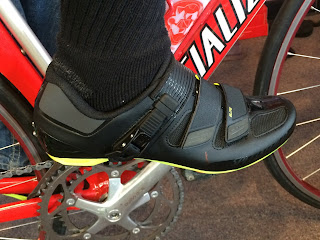 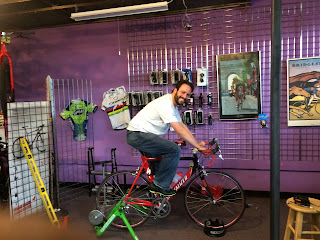 Ray at Bike and Sport then gives me a free lesson on how to ride a road bike, how to use the gears, how to sit, etc. He measures me up and discovers that the seat is a little far forward and the bike is a little too long, so he reduces the length of the handlebars. He discovers that when I cycle I'm slightly bow-legged, which may also contribute to the pain. He shifts the cleats so that my feet are further under my knees. He shows me how to unclip myself from the pedal and it's much, much easier than everybody was making out. He describes me as a natural, which is always nice to hear. This is happening. I'm going to bloody fly. 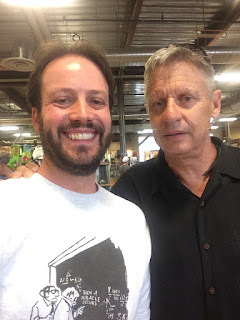 I look at the gloves at Bike and Sport and they're at full price, so I head back to REI, where, incidentally, I have a brief conversation with Presidential hopeful Gary Johnson. It's rather wonderful because just the night before I've read the entire Libertarian Platform and I had some questions that I really wanted to ask Gary Johnson. It turns out that Gary, who apparently finds smiling difficult, is a regular at REI. He's a big fitness buff. So, I ask him my core question that challenges his platform and he's clearly taking aback because he's not ever considered it. He says he'll think about it and I give him my card in the hope that he might tell me the outcome of his thoughts.

So I buy some gloves, which are essential not just because they're padded and will protect my hands from wear, but also because it's very easy for the hands to catch lots of sun and the last thing I need is sunburn. 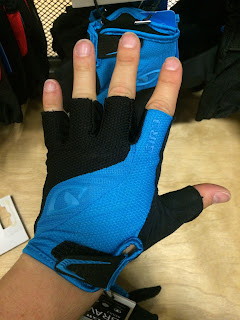 So, after two weeks off the bike, I'm about to try to learn how to ride an entirely different bike. New bike, new clips, new gloves. The knee is still sore but I'm hoping it's essentially better - I have ice on it at the moment. Even without exercise for two weeks, though, my new sensible eating regime has continued to help and I've now lost a total of 9lbs in weight since starting. People have even started commenting on how much weight I've lost, which is nice. And even nicer, some of the members of the Temple have been inspired by my weight loss to attempt their own.

So, I've lost time - two whole weeks of training. And before going on a big bike ride again I'm going to have to get used to the road bike and to being clipped in, but I'm ready. I've got 7 weeks left until the bike ride. I can't wait to see how different it is to ride a road bike and to be clipped in. One of two things is going to happen - either I'm going to soar or I'm going to fall and seriously hurt myself. Let's see....
If you haven't yet done so, please go to https://www.surveymonkey.com/r/655G575 to sponsor me.