Here we are, then! Tomorrow is the big day. And I'm terrified, actually. Let me explain why...

Last Sunday was an amazing day of cycling. I was joined by Rich Cook and told him that I hoped to do at least 70 miles, possibly 80 if I could. We set off early and the riding was good. It truly does make a difference when there's someone else to cycle with. Rich had to finish riding after 65 miles, which we completed in an excellent time. The first 20 miles we cycled in 1h23, which is only 4 minutes behind my PB. I wasn't trying to rush, we were just going at a good pace. We finished the next 20 miles in 2h52 but it wasn't without incident. In New Mexico, we have things called Sharrows. A Sharrow is a sharing arrow (see pic above). It's used in narrow roads where there isn't enough room to overtake cyclists. But New Mexico drivers don't care about that and as I was going down a fast and narrow hill someone decided to overtake me. He didn't care that there was oncoming traffic so he overtook me very, very close. It was the closest I've had to being hit by a car in a very long time. 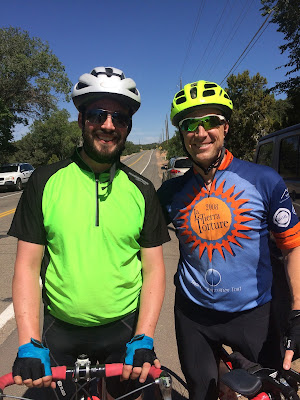 We completed 60 miles after 4h40 and Rich had to stop after 65. We had stopped only occasionally for the butt pain which was far better than in previous weeks. Maybe it just helps having company and not focussing on the butt. I pressed on - 70 miles in 5h34 and then I went as far as 80 miles in 6h31.

I had forgotten my sun cream/screen but thought that I was getting a nice tan. It turns out that was a serious mistake and I can still feel the burn (not 'feel the bern'!) a week later. At least I've remembered to bring it with me for tomorrow's ride.

What was enormously helpful was the breaks. I was able to stock up on snacks and sandwiches and leave them by our mailbox. Then we could cycle twenty miles and I could stop and eat a PB&J sandwich, which is apparently the best thing for you. But there will be no sandwiches on the ride - they'll be dishing out water, orange juice and bananas and that's it. That might be a problem. I've made sandwiches and I'll stuff them in pockets along the bike but a day old they may be rather horrible. Still, water will be more important than food, because it's going to be 88 degrees!!!! My hottest training was in 75 degrees but this is going to be more than 10 degrees hotter. I always said that heat could be the biggest problem.

And because of family illness, I've not been able to train since last Sunday. I know that a couple of days of rest is important before a ride but this is different - I've not cycled in a week. And perhaps because of that, my muscles have started straining and, most importantly, my left knee is back to hurting again. It hurts so badly that I've got it in a knee brace right now. I can't cycle in the brace because it's too tight for cycling, but I am in real amounts of pain.

This ride is going to take everything I've got. People at the Temple joke about the amount I've raised in pledges "....if you finish...!" It's a real question, actually. I really want to in order to raise around $20,000 for the Temple and the really important work that we do. But I'll just take it one mile at a time and see what happens.

Someone realised that what we should have done is raise pledges and then run a sweepstake on which mile I end up stopping on. Yes, I've now done 80 miles so the received wisdom is that I should be able to complete 100, but there are differences - less food, much higher temperature and no practice for a week. We will see how this goes...

There is still time to sponsor me. To do that, please please go to https://www.surveymonkey.com/r/655G575.

Thank you.
Posted by Rabbi Neil Amswych at 15:36