A Real Pain In The Arse

I have been riding a bicycle on the road since I was ten years old. I remember my father taking me out on the road to practice, and doing my first right-hand turn in High View in Pinner. I took my cycling proficiency and scored 96%, thereby allowing me to legally cycle on the road. So, I've been riding on the road for thirty years. Four years ago I did a long bike ride, although not as long as this. And I can say that categorically yesterday was the worst day of cycling I've ever had in my life. 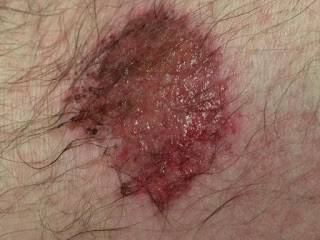 The first reason is because of the road burn I got last week. It kept oozing for a few days until it's finally started to scab over. Of course, because it's right next to my knee, as it does so it's now started to crack and pull on itself. So my right knee is profoundly uncomfortable. Never mind the left knee, which I seem to have somehow harmed many weeks ago by not riding with good enough shoes. So now both knees hurt, in differing ways. That's reason number 1. Reason number 2 is that I've had a dramatic weight gain. Jenny reckons it's muscle and I shouldn't be worried, but on the scales it's upsetting. 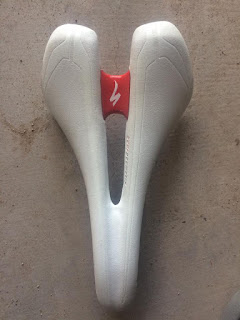 Reason number 3 is that after three weeks in this new saddle, suddenly I'm in serious pain. Butt pain. I know, the concept of butt pain is kind of funny, except for the pain part. And this isn't just it's uncomfortable riding on a pencil seat. I've actually been quite surprised at how well I adapted to riding on this road bike's seat. But for no particular reason after three weeks, it's started hurting. And I mean, really hurting. It hurts so much that yesterday I went to cycle 50 miles, and could only do 20. And the 20 that I did took as long as I normally take 30, and that's not including the times I stopped and got off the bike for a while. And when I did get off the bike, I actually howled in pain. That's how bad it is. I've never had anything like this. 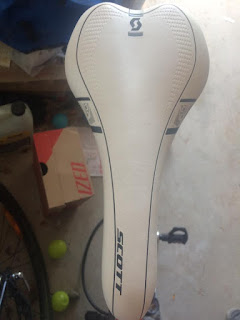 The pain isn't muscular, it's on my bones. I come from a fairly boney-bummed family (interesting Rabbinic factoid you probably never wanted to know). I feel like I've actually bruised my butt bones, but nothing's happened to cause that. When I fell last week, I didn't even land on my bum. So, this has come out of nowhere.

I was tremendously depressed. I'm only three weeks away from the big ride and I really needed to be cycling 50 miles. Instead, I was howling in pain during 20 miles. In desperation, I took the bike into the shop and changed the seat for my Scott Roadster seat. That's the seat that was originally on my road bike but which I replaced with a MUCH larger mountain bike seat. I've always been used to large mountain bike seats. I like the padding. 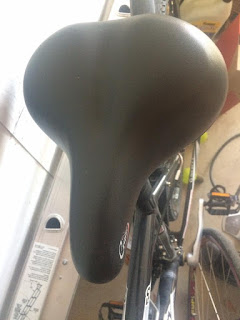 It turns out that that large mountain bike seat (right) may have been responsible for me learning to cycle slightly bow-legged which in turn led to part of the issue with my left-knee once I got onto the road bike. It's basically so big that it pushes the knees out. But it is very comfy.

Anyway, I decided this morning to take the Scott seat out for a spin. I had to get over the really depressing ride yesterday and basically get back into the saddle immediately. In my mind, I set a target of just 10 or 15 miles to test the new saddle. But I only made it 5 miles for two reasons - the seat was better and I got a puncture. When I started this blog, I was going to slightly ham it up a little (for lack of a better Rabbinic term) in order to encourage sympathy and larger donations for the ride. But I haven't had to because I've just been plagued with one thing after another. I've never had it this bad cycling. 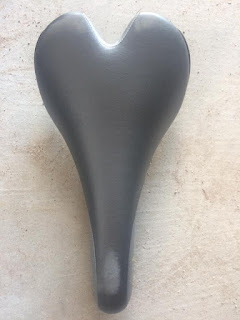 Near the end of my disastrous ride yesterday, congregant and friend Neil Lyon, who has been helping me through this training, was just about to set out on his 60-mile preparation for Acoma as I was coming home. I pulled alongside him and almost burst into tears. He had a look at my shorts and said that there was nowhere near enough padding. I explained that I had used these shorts for the other long-distance ride I had done 4 years ago. So he had a feel. I must say, it's the first time a congregant has ever touched my bum so deliberately. Neil wants me to point out that he didn't touch my bum, he rubbed it twice! But he said that for thin seats like these, I need more padding. So that afternoon he lent me a pair of his mega-expensive road-racing shorts, which basically have an extra seat in them. They're literally seat-of-the-pants.

Compare my padding (left) with the new padding (right)... 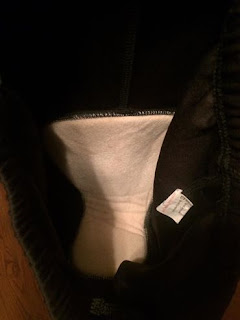 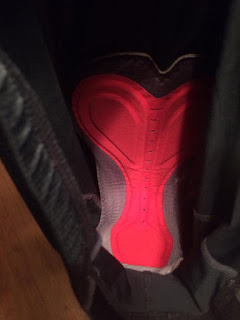 Still, even with the new padding this morning's 5-mile puncture ride was uncomfortable. So when I took the bike into the shop today, I told the guy there that even the Scott seat with new padding wasn't good enough. So he measured my butt. Apparently, the bones in my bum are 155mm apart (interesting Rabbinic factoid you probably never wanted to know #2), which is quite wide. So these seats aren't supporting me properly so I'm probably shifting around and hurting myself slowly. There was only one solution. Behold! My new 155mm road bike saddle!! 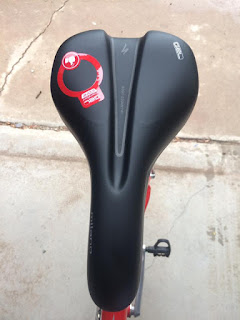 I got on in the shop and my bum hurt. He said I should maybe rest for a few days but I explained that with only three weeks to go, I have to train. So my plan is this. Try the new seat and hopefully the pain will go away. If it doesn't, I'm going back to the huge mountain bike seat. I have to be comfortable in the ride. I can't be howling in pain. And if I do go for that one, I'll just have to be very careful how I use my legs so as not to hurt my knee.

So, this has been a really crappy week. I really wanted to give up and I would have done had it not been for the sponsorship, I would have done. If you have not sponsored me, please, please do. I need all the support I can get. You can sponsor me by going to

I need your help. Please sponsor generously. Thank you.
Posted by Rabbi Neil Amswych at 17:37