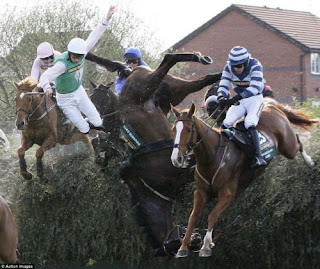 I haven’t asked my cousin what he thought of last week’s Grand National, in which two horses died and a jockey was so injured that he has had to be put into a medically-induced coma. I have written in other places about sport and have indicated my preference for getting people to play sport rather than grow fat watching it. My support for particular sports declines further when the participants – human or other - are killed as a result of their participation. Yet worse still is the idea of gambling on a sport in which participants are killed -  it’s not “just a flutter” when a person profits from the death of another living being.
Perhaps the annual carnage of the Grand National can remind us that God gave us dominion over all the fish, the birds and land animals (1:28) and that it is our choice what that responsibility can mean – we can either help them flourish or we can work them to death. While most moden Jewish commentators will baulk at the idea that dominion over the animals ever meant that we have the right to do whatever we want with them, there were commentators who held this opinion, even if they were always in the clear minority.
Apparently the Grand National is "the greatest horse race of all." But what is it that makes it great - the possibility of death? How does that not make it "the most perilous horse race of all?" Is it really great to be racing animals so close to death? The Grand National, then, is really a test of who we are and what we do with the awesome Divine responsibility bestowed upon us… is our dominion benevolent or callous, kind or cruel? I would suggest that this week’s Grand National does not provide a favourable answer and maybe it's time for us to tip the scales towards benevolence and kindness.
Posted by Rabbi Neil Amswych at 14:09 0 comments


While Zafra has been prone to spontaneous vomiting over my clothes, I've taken to wearing fairly shlochy attire - old T-shirts in particular. [For those not familiar with Yiddish, a "shloch" is kind of what it sounds like, someone who is unkempt.] But I've come to realise that because I wear slochy clothes, I look like a shloch. In a recent conversation with my loving and eternally patient wife, Jenny, I realised that one shirt that I've been wearing is actually quite old...18 years old, in fact. That's half my life I've had that shirt. It's a shirt I printed at the Haberdashers' Aske's Summer School in the early 1990s and, although you might not be able to see them in the photo, there are aome pretty sizable holes and stains on it now, so it is really quite slochy. In fact, if I'm honest, half of my wardrobe is completely shlochy and I think I have to say that it's partly deliberately so.

I've never been one for fashion. As far as I'm concerned, fashion is just another way of making people unhappy with perfectly usable clothing in order that they buy more of it - planned obscolescence gone mad. How one perfectly usable garment can suddenly be undesirable or, worse, discarded, just because other people aren't wearing the exact same garment is utterly perverse. At the moment, around 2 million tonnes of clothing and textiles are discarded in the UK every year. So I wear clothes until they have holes in and when they have holes in I find myself thinking, "Who cares? Yes, this shirt has a hole in it. Do I really care about what someone thinks if they're the kind of person who will think less of me for wearing a shirt with a hole in?"

But the truth is I think I do, particularly because Bournemouth is one of those towns where people will bump into you. The number of times I've been "off-duty" (is a Rabbi ever truly off duty?) and bumped into someone while shopping or in the street (I particularly enjoy those moment when people start hiding their shopping trolley behind them because they don't want a Rabbi to see what they're buying!). It's one thing to be at home in a shirt with a hole in, it's another to be out in the street where members of my community, or of another community, might see me. If nothing else, it doesn't look brilliant for the synagogue if the Principal Rabbi walks around with irreparable holes in his clothes.

So it's time to smarten up.... but I don't want to.... I genuinely don't. Every shirt that's produced is more resources, more pollution. A single cotton shirt takes over 2500 litres of water to produce. It may well give a job to someone in a distant country but transporting it across the world is utterly unnecessary pollution. Even if it's a fairtrade organic cotton shirt, it's still replacing a shirt I already have just because people will judge me and that seems ludicrous.

Perhaps the only answer is in charity shops. Clothing in charity shops has essentially travelled a very short distance because it already travelled far for the previous consumer and I'm not liable for that journey or the resources use in creating the clothing. Buying from a charity shop also means that I'm not adding to the ridiculous profits of the giant supermarkets who squeeze independent businesses out of the market.And, of course, buying clothes from charity shops means giving more money to charity.

All this has got me thinking much more about the mitzvah of bal tashchit - the commandment of not wasting resources. I wrote a summary on this mitzvah which you can see at http://www.bournemouthreform.org/index.php?option=com_content&task=view&id=254&Itemid=38. The connecting point between my spirituality and my environmentalism is here in this mitzvah (commandment/compelling commitment) but I'm afraid to explore the consequences of this because of how profoundly I know it will change my life if I do. I think maybe this is what this blog is truly about - my high impact, low impact life. I think this is the starting point of a long journey...
Posted by Rabbi Neil Amswych at 16:11 6 comments