Why aren't we angry?

In September 2002, days after Tony Blair put over Britain's spurious case for war against Iraq, somewhere between 150,000 and 400,000 people marched in protest through the streets of London. Over the coming months across the world demonstrations of similar sizes protested against a war that offended a wide range of members of the public. As we know, the US and UK dived into war regardless, dragging other nations behind them and the ratings of Blair and Bush eventually suffered a terminal decline.

In 2009, hundreds of thousands of people took part in The Wave in London, a march to show a desire to move towards a sustainable economy. It was a tremendously good-natured affair, a living expression of contemporary environmentalism's enforced social agenda of being hopeful and not giving in to negativity. It was a protest of sorts - a positive "We're ready for change" kind of protest. It wasn't direct action protest and it wasn't angry.

But why not? Why are so many people happy to rage about a war that cost hundreds of thousands of local civilian lives in order to secure future oil supply but aren't happy to rage about the war on the earth that has the potential to cost billions of lives over the centuries?

The question comes to my mind as my daughter, Zafra, grows. Now 18 months old, I pray she will live to a happy old age. Yet as I consider this I also consider the words of an elderly  congregant of mine - "I'm glad I won't be alive to see the things that you'll see." She understood. The environmental legacy that we pass onto the next generation becomes more and morelikely to become horrific with each day of inaction. If Zafra lives to see the end of the century, I shudder to consider what she might see and that makes me angry.

I look at the failure of the COP talks that essentially locks us into a minimum of 2 degrees of global heating, with the potential of much more, especially considering the possibility of runaway feedback effects, and I think, "You are potentially harming my child. You are potentially exposing her to horrors and hardship that you could have prevented."

Perhaps one of the differences between the war in Iraq and anthropogenic climate change is that we - the average civilians - didn't cause any of the deaths in Iraq whereas while we continue as excessive consumers, we are at least partly responsible for anthropogenic climate change. Putting pressure on government is important but focussing all criticism on government is misplaced. Some of the anger should be aimed towards ourselves for our own hypocrisy.

But there is a place for angry challenge. Not shop-smashing challenge (if for no other reason that to repair violent damage uses yet more precious global resources), not rioting, but actually unifying as a mass of people and saying to the political parties, "Unless you take this much more seriously than you currently do, you will not win the next election." Putting environment before the economy should be a political win, not a loss, and the reason that it isn't is because of us, the voting public and our inability to expressanger.

We limit ourselves, but hardly. We say "Reduce, Reuse, Recycle" but what we really do is "reduce costs, buy cheaper reused products and recycle, recycle, recycle" as though recycling alone will somehow avoid dangerous climate change. We limit ourselves but only as a meagre contribution. "Is this the fast that I have chosen?" says Isaiah (58:5). In other words, this is it? That's pathetic! Isaiah is angry at the tokenism of the masses and the leadership who influence them. 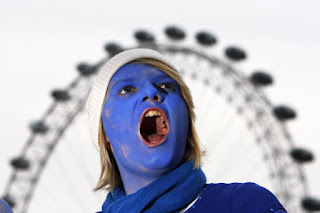 Maybe it's time to reignite some of that anger, that passion, and say, "We will not tolerate this. We must all do better. No ifs, buts or maybes. No more excuses." Well-focussed anger, dissatisfaction at the status quo, is surely what we need to kick-start the dramatic changes that our society needs. Let's generate that anger and focus it properly.... and soon.
Posted by Rabbi Neil Amswych at 18:20 1 comments

Only when the last tree has been cut down;
Only when the last river has been poisoned;
Only when the last fish has been caught;
Only then will you find that money cannot be eaten.
This Cree Indian maxim comes to my mind after having last night watched the film The Road, based on Cormac McCarthy’s bestselling novel. In that film, social order has broken down entirely as the biosphere essentially collapses. Amongst other things, all the trees have died and throughout the film the thudding of another dead tree as it falls to the ground echoes in the distance. It is a chilling vision.
But it won’t happen to us, right? Well, strictly speaking it won’t… even if we can’t limit global heating to 4 or 5 degrees Celsius (which is looking harder and harder for every year of pontificating and posturing at Climate Change summits), it seems almost impossible for the biosphere itself to die. And yet the idea that social order could collapse is not as impossible. There is increasing realisation that our society now is “nine meals from anarchy” – after three days of lack of food, it seems that most people will do anything to make sure that they and their loved ones can eat.
But it won’t happen to us, right? Well, not as such. Even with positive feedback loops starting to kick in, toppling the millennia-held climate stability upon which our civilisation was based, we’re still unlikely to witness social breakdown in our lifetimes. Instead, it is the inheritance that we seem to want to give to our children, grandchildren or perhaps great-grandchildren. Rabbi Charles Middleburgh writes “our children might forgive our silence and apathy on environmentalism, but our great-grandchildren will curse us for our selfishness…” [MANNA 94, Winter 2007, p.22]. If we continue to think in the short-term, it won’t happen to us, no. But if we live from the perspective of “us” being our extended family through the generations then, yes, unless we all make significant changes now, it will happen to us.
Today is Tu Bishvat, the New Year for Trees. I find it hard to celebrate this year. Yes, there’s the glory and beauty of every tree in the garden and local parks but the crashing of the millions of trees globally that fall to provide people with land, palm oil, coffee and more just echoes through my soul today. Maybe today for Tu Bishvat as well as singing happy songs about how lovely trees are, we should remember the thought from Pirke de Rabbi Eliezer - when a tree is cut down, its cry rings from one end of the world to the other, though no sound is heard. Maybe it’s time to hear the sound so we can help more trees, and future us, live together in harmony.
Posted by Rabbi Neil Amswych at 03:29 0 comments