Earlier this week, the obelisk that has stood in the Santa Fe plaza since 1866 was torn down at the end of a protest on Indigenous Peoples’ Day, formerly known as Columbus Day. It was torn down by people who objected to the phrase that was etched into one of its sides, describing Native Americans as “savage.” On another side of the obelisk, though, was an inscription praising Union soldiers who died in the Civil War, thereby ensuring that slavery did not continue in this land. Years ago, someone scratched out the word “savage” but the fact that a monument still stood that contained a plaque celebrating defeating the indigenous population in battle was still obviously problematic for many locals.

I totally support changing the name of Columbus Day to Indigenous Peoples’ Day, and changing the focus of what we learn on that day. Some of Columbus’ actions were so monstrous that he was returned home in chains and had his commission stripped from him. One person who accompanied him on his voyages wrote “Such inhumanities and barbarisms were committed in my sight as no age can parallel… My eyes have seen these acts so foreign to human nature that now I tremble as I write.” (Bartolome de las Casa). In 1495, he started the Transatlantic Slave Trade, shipping 500 Arawaks back to Spain, although 200 of them died on the journey. Due to barbaric treatment which he started in earnest, the approximately 300,000 Arawaks who had existed before Columbus’ arrival were all gone by the year 1650. So, of course we should not be celebrating him. The shift from Columbus Day to Indigenous Peoples’ Day was first discussed in 1990 and implemented in 1992 in Berkeley, California. More and more cities around the US are replacing Columbus Day with Indigenous Peoples’ Day every year. It has taken thirty years of honest dialogue to bring about that change in an increasing number of cities. That change was not brought about by violence or by smashing monuments to Columbus, it was brought about through a deliberate process of educating people about who Columbus really was, and educating people of the pain of the Native American community. The introduction of another narrative that challenges conventional thinking takes decades to take hold in most of society.

The same could be said of ending of the Entrada in 2018, which was a huge victory for the process of peaceful demonstration and subsequent negotiation that started with the first formal objection to the ritual back in 1977. That opposition started to swell in 2015 until it became obvious that not only was the narrative of the Entrada false but also offensive to many people. With Columbus Day and the Entrada, deliberate and careful changing of the social narrative was what brought about profound change. 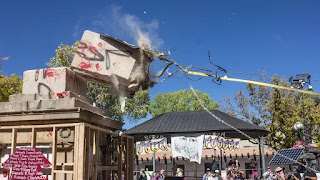 I appreciate that support for this act could come from other acts of historic civil disobedience which shattered a deeply ingrained social narrative and introduced them to another narrative that they had not yet considered. For example, Susan B. Anthony illegally voted in 1872, Rosa Parks refused to move from her bus seat when a white man wanted it, and thousands of Americans burned their draft cards to Vietnam. But I believe that there is a difference between these acts and what happened at the obelisk on Monday. These acts challenged the narrative but they did not destroy property that others held to be dear. Of course, Jews have historically never really been very attached to property because we were always moving from one land to another as a result of persecution, except for one piece of property which has always been held dear to our hearts – the Temple. We pray towards the Temple not because we believe that God is in one physical place but because that act unifies us, it focuses us, it forms a navigating point for us as a people no matter where we are. In a similar but obviously far lesser way, the obelisk was the same for many Santa Feans. It was an assembly of stones that helped orient all Santa Feans. It was literally at the center of the Santa Fe community. Its blandness artistically helped it represent everyone, even if one of the plaques below did not. Perhaps better than comparing it to the Temple would be comparing it to Jacob setting up a pillar of stones and calling it Bet-El – the house of God (Gen. 28:19). It wasn’t the stones that made the place the house of God, they just marked it the intention he gave to the site. Of course, Jacob acted alone and did not ascribe his monument to any victory over other people, so I acknowledge that my analogy is therefore far from perfect.

What we do know is that since it was destroyed, there have been far more public expressions of racism against the Native American community, and that cannot be a good thing. I understand that such expressions are a symptom of pain, but there are ways to release pain that can be healthy and ways to cause pain that can be extremely unhealthy and that lead to more pain. Consideration of removing the obelisk is not new – in the past its removal was blocked simply because it was a federal survey point! Maybe too many privileged people waited too long to change the dominant social narrative. It is our job to “seek peace and pursue it” (Ps. 34:14) but maybe we tolerated the status quo instead of seeking peace, which is why the ultimate act of civil disobedience needed to happen.

Now we have to look forward. I have already submitted the suggestion to the city that in the future the three uninscribed sides of the plinth carry an identical message of reconciliation in English, Tewa and Spanish. Faith leaders from the Interfaith Leadership Alliance of Santa Fe, as well as other faith leaders in future weeks, will be gathering on a weekly basis at the plaza to offer prayers and readings of reconciliation. A city-wide panel is being put together to address matters of reconciliation that probably should have started earlier but is certainly happening now. The plaque celebrating defeating Indians should never return and should perhaps be placed in a museum… if any museum even wants it.

But what about Santa Fe? How do we go about the process of reconciliation? The first and most important stage is, I believe, to hear each other’s pain and to recognize that even those who share the same experience will necessarily frame that experience through the lenses of differing narratives. So, we need to share our narratives, truly hear them, and not try to prove or disprove them in the face of other narratives. Then, we need to work out a way to take elements from all our differing narratives and form a shared narrative. If nothing else, the destruction of the obelisk in the plaza reminds us how essential that work of dialogue in forming a new narrative truly is. Sometimes change is gradual and sometimes it is abrupt. Sometimes we need a dramatic event like the destruction at the Sea of Reeds and sometimes we need to grow and learn through trial and error like the forty years of wandering in the wilderness. We cannot yearn to return to Egypt for that way is rightly closed to us forever. We must press on. May we do so with strength and with compassion.

Posted by Rabbi Neil Amswych at 15:41